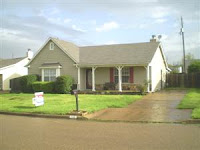 I feel like such a slacker for not posting on here since the end of March!! I have a good excuse though. Alex and I have been househunting for about 2 months now, and we've finally found a house!!!! :o) I am so excited to own my first home!! YAY!! We're scheduled to close next Friday, so you can imagine everything that's going on where we're living now......lots of boxes, newspaper, and stuff to pack. Fortunately, we've already got lots of people that are willing to help us move, and we are so thankful.
In other news.....school is almost over for the semester for Alex and me. It's been tough keeping up with all of our schoolwork with all the house stuff butting in. Last final for me is scheduled for May 1, and Alex has his last one sometime early that same week, I believe. Be praying that we both have good grades at the end of the semester!!! :o)
In spite of all of this, I've managed to get some reading squeezed in, too. :o) Here's some of the stuff that I've recently finished:
As I Have Loved You by Nikki Arana
At the Golden Gate by Freda Chrisman
A Perilous Proposal by Michael Phillips
The Martyr's Song by Ted Dekker
The Measure of a Lady by Deeanne Gist (FABULOUS!!!)
I can't wait until next month because I'll have a break from school, and a big chance to get caught up on some of the series that I've been wanting to tackle!! Until then, I'm going to try to read Love Takes Flight by Jane Peart and Three Days by Melody Carlson--both were recently checked out from the library.
I guess that's all for now! See ya next time!!
-------------------------------------------------------------
Currently listening to--Orphans of God by the Talley Trio (can't seem to get this song off my
mind lately)
Posted by Unknown No comments: Links to this post