I've been tagged by 2 fellow bloggers, Laura Davis and Caprice Hokstad, so here we go..... :o)

Here are the SIX RULES of tagging.
1. Link to the person who tagged you.
2. Post the rules on your blog.
3. Write six random things about yourself.
4. Tag six people at the end of your post. Link to them if possible.
5. Let each person know he or she has been tagged.
6. Let your tagger know when your entry is up.

1. I missed being the Valedictorian of my Senior class by a tenth of a percent.
2. I have never broken a single bone.
3. I lived with my in-laws for the first 5 years of my marriage. Most would think that I had lost my marbles by doing that, but I truly have the greatest in-laws.
4. I've sung Southern Gospel music in a group with my parents for the past 10 years.
5. I do not like the smell of coffee AT ALL. I refuse to ever own a coffee maker, and I have only allowed one in my house on one occasion to accommodate my husband's grandparents.
6. It has always been my secret wish to own my own craft store one day. 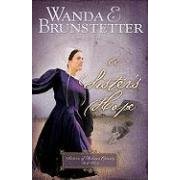 Lose yourself in Holmes County, where romance, suspense, mystery, and faith-filled Amish ways rule the day! Martha Hostettler is concerned about the continuous attacks being made on her Amish family. With a definite motive and a myriad of methods, Luke Friesen looks like the culprit. Determined to clear his name, Martha decides to play detective. What will the search for truth cost her?

I've read this entire series, and I didn't want to share my thoughts until I read all three books. Each book is based on one of three sisters in the Hostettler family. The first book tells Grace's story, the second tells Ruth's story, and the last one tells Martha's story. After reading book one, A Sister's Secret, I had very high hopes for the two remaining books because I couldn't keep my hands off of the first one. I loved the story line, and was not expecting what Grace's secret turned out to be.

The second book, A Sister's Test, dealt with Ruth's story. She is engaged to another Amish man in their community, and he feels a sense of urgency to marry Ruth as soon as possible. Ruth's faith is about to be tested to the hilt when things change that will affect the rest of her life. However, this book was such a slow read, and there were times I wanted to throw it up against the wall!! After I continued to read about all the attacks that are still happening to the Hostettler family, it was all I could do to finish the book.

Finally, book three, A Sister's Hope, shares Martha's story. I was a bit intrigued to know how the author would wrap up the story just because I felt that it had been going on far too long. Martha decides that she is going to play detective to try to solve the mystery of who is responsible for the attacks on her family. Meanwhile, she's starting to fall for the community's resident bad boy, Luke. Martha's father detests Luke, and if he knew that Martha cared for Luke and he for her, he would be in an uproar. Luke wants to help Martha figure out who's the guilty party so he can clear his name with Martha's father since he suspects Luke is the one responsible.

Thoughts on the series as a whole:


I really enjoyed the first book, but that was about it. I just could not get interested in the storyline anymore once I started the second book. To have acts of vandalism committed against a family for 2 years solid with no answers just doesn't make sense, especially in the last 2 books where they seemed to happen more frequently. In addition to that, I found the characters to have hardly any depth, and the conversations were so simplistic and seemed to lack emotion. Just to be fair, I want to try to read another book or two by this author because I have heard good things about her past novels. We shall see, I suppose.....

**Special thanks to the publisher for providing these books for review.

Book Review: Come to Me by Laura Davis/5 Stars

This month, the CFRB is featuring Come to Me by Laura Davis


About the book:
Journey back in time and rediscover the Jesus you never knew. See Him through His mother's eyes as she tells the story of her son. Share in Mary's joy at the birth of the Saviour and mourn with her at the foot of the cross. Come to Me is a story about the faith and obedience of a young girl whose absolute trust in God set in motion a chain of unprecedented events. It is a moving tale of the life of Christ from the mother who raised him to become the Saviour of the World.

Come to Me was like no other story that I have ever read that portrayed the life of Christ. At first, I admit that I was a bit skeptical because biblically-based historical fiction is one of my favorite genres to read and I've read so many versions of Christ's story as told by other authors. But then, there's Laura Davis...... She wrote about the life of Christ through Mary's eyes, and it was simply amazing! When I finished it, I couldn't help but think to myself, "This book would be such a great witnessing tool! If I knew someone who was lost, I would just hand them this book!" There is so much Scripture packed into this book, but it is not preachy. It is just told as a story from Mary's point of view, and as you are reading, it almost feels like you're there.

Mary's character is so engaging, a little bit of a tease, as well as a bit like the girl next door. I enjoyed getting more of a glimpse of what might have been Jesus' younger years before the incident at the temple when he was about His Father's business. Joseph and Mary's relationship also seemed more like how I would picture them....young and in love, but at the same time, nervous about their duties as parents to the Son of God.

So many other portrayals of Mary, Joseph, and Jesus seem to be uptight (whether it's in a book or movie format), but this book is so refreshing, realistic, and natural. I highly recommend this book, and I look forward to reading more from Laura Davis in the future!

**Many thanks to the author for providing a copy for review.

If you'd like more information about Laura Davis and her debut novel, please visit her website at
http://www.authorlauradavis.com/

Book Review: When the Going Gets Tough, the Tough Get Ice Cream by Laura Jensen Walker/4 Stars

Funny woman Laura Jensen Walker has had her share of challenges--from surviving cancer to dealing with the untimely deaths of her brother and father. But whatever life throws her way, she laces it with determination, humor, faith, and a big bowl of ice cream. In this candid book, Laura offers a unique take on tough times and stressful days in one funny and flavorful story after another. Her delightful sense of humor will touch readers with the healing power of laughter, and her perceptive insights will leave readers wanting a second scoop, as she shows them that God is in control through all the rocky roads of life.

First of all, let me just say that Laura Jensen Walker is great with humor!! I had already read one of her books, Dreaming in Black and White

, and I thoroughly enjoyed it! She has a great knack of using just the right words to make you laugh and smile.

When the Going Gets Tough, the Tough Gets Ice Cream is a collection of personal stories that Laura has put together about different events in her life. I could definitely identify with her college experiences, especially with not knowing what I want to do with my life (choosing a major is not an easy thing). But I loved reading about her travels in Europe, whether it was because of work or going over there for pleasure. The stories weren't always about the good times. She talks about her struggles with breast cancer and deaths in her family. But through it all, there was always a bowl of ice cream nearby.

I typically don't read a lot of non-fiction, but the title and book cover alone compelled me to read this book. It was wonderful, light reading that gave me a good laugh at the end of some of my crazy days lately.

Southern?  No
Sass?  Some

Posted by Unknown No comments: Links to this post