Be Prepared for Butterflies in Your Stomach! - A Heart Most Worthy by Siri Mitchell 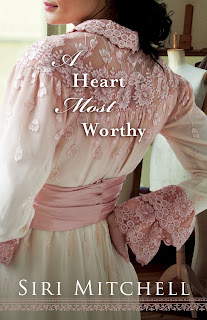 This was one of the those books that just would not let me go until I reached the very last page.  While the characters and the setting were quite ordinary, the intricacies of high fashion and historical detail were so well-crafted that I felt transported to the time and place.  Through Siri's skillful storytelling, it was easy to imagine living in a squalid tenement, cramped with other immigrant families, and hoping that I would have enough money to feed my family that day.  Now, imagine that daily lifestyle with the backdrop of the Spanish influenza epidemic and World War I, and it's not difficult to see why this book was so captivating.

The story follows three unique girls, each with their own stories, and they all happened to work together at Madame Forza's gown shop.  Julietta was a little on the reckless side--fascinated by Angelo's mystique, yet not crazy about the danger he seemed to attract.  Luciana wanted nothing more than to blend in with the crowd, lest she be found by the men who murdered her family and followed her to America.  And finally, Annamaria...my personal favorite.  She longed for a life of lesser responsibility, where no one immediately assumed that it was her job to take care of her parents into their old age, but instead, to create a new beginning with the man of her heart.  This man just happened to be from the grocer's shop across the street, only he's the last person she ought to be attracted to.

While A Heart Most Worthy most likely would not be considered a historical romance, the romance elements of the book were some of the best I've read in ages.  Few authors can weave it into their tales in such a beautiful way that it makes one think back to the early days of their own individual love story.  Siri is one of those authors.  For example, Annamaria was literally forbidden from speaking to the grocer's son across the street, yet after each visit there, the attraction between them escalated after a quick glimpse here or a subtle smile there.  When they spoke to one another for the first time, my stomach was so full of butterflies, you'd think I was going on my first date!

Even though I've only read two books now by Siri, it's going to be extremely difficult for any of her others to match up to this one.  I could go on for another two or three paragraphs about everything that I loved, but I've tried to leave a little bit to entice a new reader.  The story was unique, the setting realistic, and the romance...well, I think you know my feelings on that.  *wink*  A Heart Most Worthy was one of the most satisfying books I've read in a very long time, and has easily carved out a line on my Top Ten Books of 2011.

Southern?  No
Sass?  A little bit, mostly from Julietta

Summary of A Heart Most Worthy:

The elegance of Madame Forza's gown shop is a far cry from the downtrodden North End of Boston. Yet each day Julietta, Annamaria, and Luciana enter the world of the upper class, working on finery for the elite in society. The three beauties each long to break free of their obligations and embrace the American dream—and their chance for love. But the ways of the heart are difficult to discern at times. Julietta is drawn to the swarthy, mysterious Angelo. Annamaria has a star-crossed encounter with the grocer's son, a man from the entirely wrong family. And through no intent of her own, Luciana catches the eye of Billy Quinn, the son of Madame Forza's most important client. Their destinies intertwined, each harboring a secret from their families and each other, will they be found worthy of the love they seek?

**Many thanks to Bethany House for providing a copy for review.

(Wait, what are you still doing here?  Oh, you're leaving a comment, are you?  Well then, by all means...help yourself!)