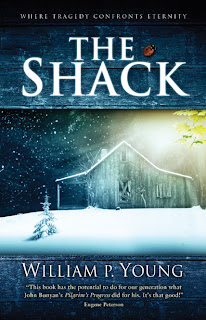 
Mackenzie Allen Philips' youngest daughter, Missy, has been abducted during a family vacation and evidence that she may have been brutally murdered is found in an abandoned shack deep in the Oregon wilderness. Four years later in the midst of his Great Sadness, Mack receives a suspicious note, apparently from God, inviting him back to that shack for a weekend. Against his better judgment he arrives at the shack on a wintry afternoon and walks back into his darkest nightmare. What he finds there will change Mack's world forever.
In a world where religion seems to grow increasingly irrelevant "The Shack" wrestles with the timeless question, "Where is God in a world so filled with unspeakable pain?" The answers Mack gets will astound you and perhaps transform you as much as it did him. You'll want everyone you know to read this book!
My thoughts:
After reading this book, I can now see why it is so controversial. While I don't have the same opinions of it as some, I found the majority of the storyline to be completely relevant to the times we're living in today. There were times when I was reading and I just had to stop for awhile to let what I had just read soak in. What spoke to my heart the most was how much I, as a Christian, pass judgment on other people. It's been several days since I read the chapter that deals with that, and it's still not letting me go.
Two things I didn't care for.... 1) I'll admit that I did a double take when I read that God was a woman, but I understood why the author presented God in that way. And 2) I think it was completely unnecessary for swearing to be included in this book. There wasn't a lot, but it was more than I am comfortable reading when a book is labeled as "Christian fiction."