Love Finds You in Homestead, Iowa 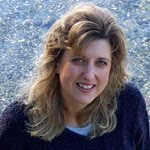 Prior to launching Dobson Media Group in 1999, Melanie was the corporate publicity manager at Focus on the Family where she was responsible for the publicity of events, products, films, and TV specials. Melanie received her undergraduate degree in journalism from Liberty University and her master's degree in communication from Regent University. She has worked in the fields of publicity and journalism for fifteen years including two years as a publicist for The Family Channel.

Melanie and her husband, Jon, met in Colorado Springs in 1997 at Vanguard Church. Jon works in the field of computer animation. Since they've been married, the Dobsons have relocated numerous times including stints in Virginia, Tennessee, North Carolina, Colorado, Berlin, and Southern California. These days they are enjoying their new home in the Pacific Northwest.

Jon and Melanie have adopted their two daughters —Karly (6) and Kinzel (5). When Melanie isn't writing or entertaining their girls, she enjoys exploring ghost towns and dusty back roads, traveling, hiking, line dancing, and reading inspirational fiction. 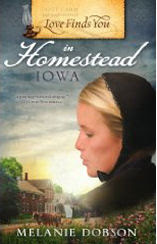 Times are hard in 1894. Desperate for work, former banker Jacob Hirsch rides the rails west from Chicago with his four-year-old daughter, Cassie. When a life-threatening illness strands the pair in Homestead, Iowa, the local Amana villagers welcome the father and daughter into their peaceful society. Liesel, a young Amana woman, nurses Cassie back to health, and the Homestead elders offer Jacob work. But Jacobs growing interest in Liesel complicates his position in the Amanas. Will he fight to stay in the only place that feels like home, even if it means giving up the woman he loves? Or will Liesel leave her beloved community to face the outside world with Jacob and Cassie at her side?

If you would like to read the first chapter of Love Finds You in Homestead, Iowa, go HERE.

This was a very good story, and my first experience with author Melanie Dobson. It was also my first time reading a story that shared some history about the Amana Society. As with all the books in the Love Finds You series, this story focuses on a real town in the US as well as some of the history of that town.

I loved the gradual relationship that formed between Jacob and Liesel. At the beginning of the book, Liesel is engaged to another man, and is advised several times that she must guard her heart and not become to attached to Jacob and his precious daughter, Cassie. Jacob and Cassie first arrive in the town of Homestead with Cassie sick with diphtheria. The three of them are quarantined at the local doctor's house for several weeks while Cassie recovers, and they gradually get to know each other. Liesel is confused at first as to why Cassie's mother is not there to care for her sick child, but Jacob has not shared with her yet that he lost his wife in childbirth the year before. The more Liesel gets to know Jacob, the more she realizes that no one is giving him a fair chance. All he wants to do is to find work and care for his daughter. When the Elders first learn that Jacob knows how to swim, they realize that maybe they should give him a chance after all because he can be a huge help to the rest of the community. Once Jacob is cleared from the quarantine, he begins to work on a dredge boat with some of the other locals, and Liesel continues to care for Cassie while he is away. During this time, Liesel becomes very attached to Cassie, and wonders what the future holds in her relationship with Cassie's father.

The Amana Society seemed very similar to the Amish lifestyle, which was one of the reasons I was intrigued to read this book. The Amanas have Elders that oversee the entire community and make sure that everyone is contributing and following the rules, whereas the Amish have Bishops that lead the church services and make sure that their community is following the guidelines of their Ordnung. In both communities, everyone looks out for each other, and they all do their best to maintain a lifestyle that is set apart from the outside world. The biggest difference between the two was that the Amanas lived in a communal society with everyone contributing to the community. The members do not have to worry with money because all of their resources are shared with one another.

The only thing that I would've liked to have seen more of was the history of the Amana people and their Society. I wished there had been more of it sprinkled throughout the story because there were a couple of scenes where certain things didn't make sense. To give the author credit, there was a footnote at the end that explained what happened to their Society in the years following 1894 (the year this story took place).

All in all, I think Ms. Dobson is a very good storyteller, and is very good at invoking emotions in her stories. If you haven't had the opportunity to read anything in the Love Finds You series or anything by Melanie Dobson, this story would get a high recommendation from me. I'm surprised that this is only the first book that I've read by her, but I can promise you this...it most certainly will not be my last!
Posted by Unknown